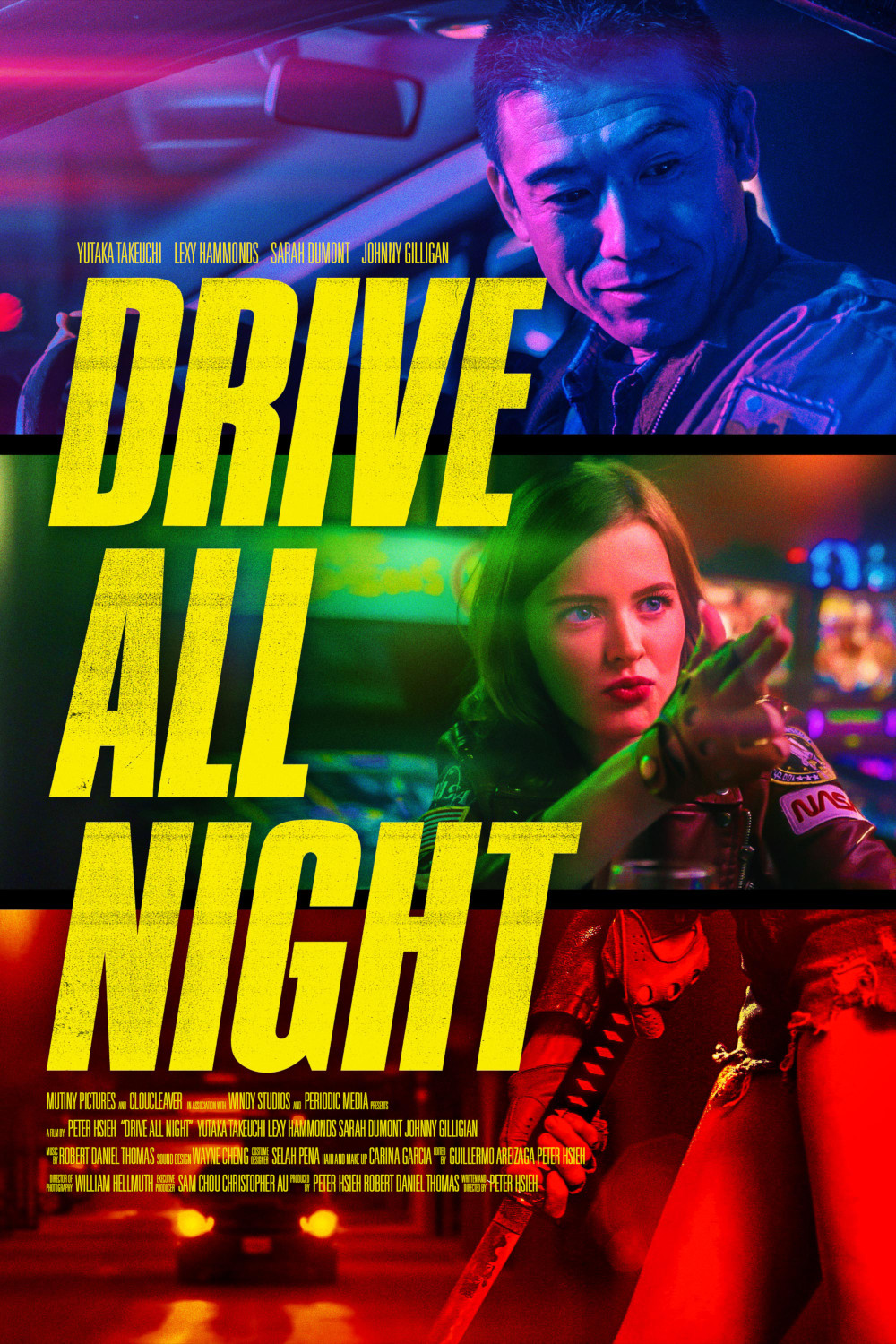 Drive All Night is out now on all major digital platforms!

Experience the film for the first time or purchase to watch again!

Drive All Night is playing at Portland Film Festival from October 6th through November 8th. Portland Film Festival is Oregon’s largest film festival by filmmakers for filmmakers. It was named “one of the coolest film festivals in the world,” by MovieMaker Magazine and has won the distinction of being named one of the “50 films festivals worth the entry fee" for several years including 2020.

Tickets are available online at portlandfilm.org

Sarah Dumont sits down with Beth Shiller from Fandomize to talk about her new film Drive All Night, playing Morgan, working on a small indie film with a first time director, and debuting the film at Cinequest.

Big News! US development, sales, and distribution company Mutiny Pictures has acquired world-wide rights to Drive All Night. This is really exciting because it means that more people will be able to see and experience the film. We are happy to be joining the Mutiny crew who are a group of experienced film industry professionals who love film and want to support filmmakers.

Drive All Night Plays at CAAMFest May 13-23rd

We are excited to announce that we will be continuing our film festival run at CAAMFest playing May 13-23rd!

Peter Hsieh Couldn't Sleep, So He Created Drive All Night

To some, Silicon Valley is already a wonderland. Playwright Peter Hsieh saw another side to it, and taking his own sleepless nights driving around the edges of downtown San Jose as inspiration, he created a slightly darker vision.

Drive All Night still has hope, of course, and Hsieh sat down with Derek from his apartment in New York to talk about his experiences in theater, gaming, and directing his first feature film, coming to Cinequest this week.

"Cinequest is always searching for films that stretch the boundaries of storytelling, and visions from artists who are looking to reinvent genres. ‘Drive All Night’ is a spectacular example of a story we have never seen before. It took us by surprise, took us on a ride, and it swept us up in one of the most unpredictable journeys." - Michael Rabehl, Programming Director at Cinequest

Drive All Night to Debut at Cinequest

We are excited to announce that our film will be making its world premiere at Cinequest, running March 20-30, 2021!

Voted Best Film Festival by readers of USA Today, Cinequest draws an audience of over 110,000 to its annual event celebrating innovation, discovery and creativity in the heart of Silicon Valley.

The festival will be held online with a possible in-person event in August.

Get your tickets now!

Drive All Night is a surreal, dreamlike mystery that’s equal parts romance and thriller. The film follows Dave (Yutaka Takeuchi), a swing-taxi driver whose night takes an unexpected turn when he picks up Cara (Lexy Hammonds), a mysterious young woman with an uncanny knowledge of arcade games and a dark secret.

After leaving the 24 hour diner where a particularly charming waitress named Morgan (Sarah Dumont) works, Dave gets a call from Cara and picks her up at her motel. She makes him drive around the city without a clear destination or motive and has him accompany her on a number of seemingly random excursions - each one stranger than the next.

Meanwhile Lenny (Johnny Gilligan), a deadly hit-man is hot on their trail. Guided by strange visions and by order of a mysterious mob boss (Vonn Scott Bair), he prowls the city looking for the pair. Every place he searches brings him one step closer.

Will Lenny catch up to Dave and Cara before it is too late?

What happens when the night ends? 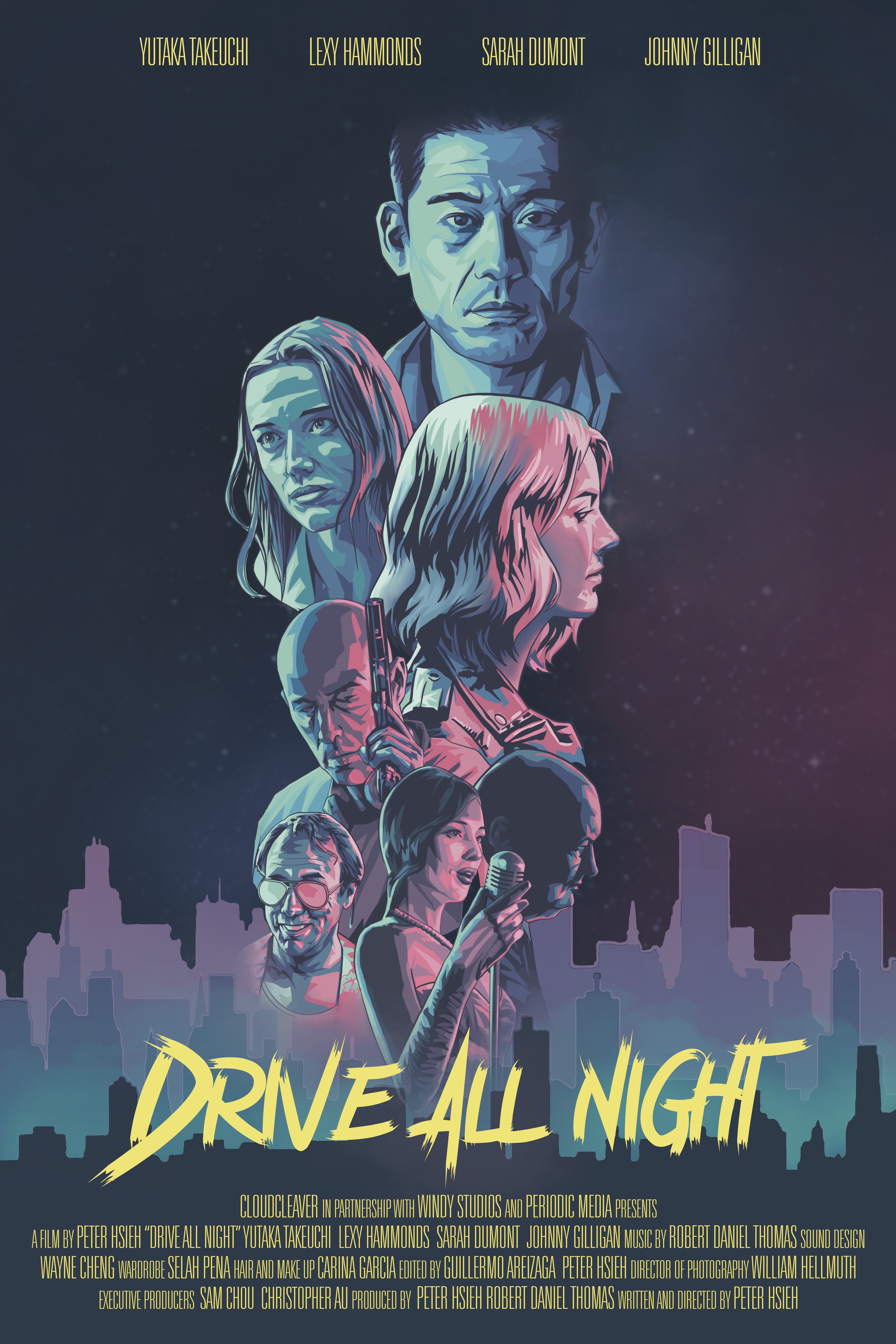 From Writer and Director Peter Hsieh

I used to take these long late night drives through the city. Whenever I had trouble sleeping and my mind was racing, I'd get in my car, turn on some music and drive. That was the initial inspiration for Drive All Night. At its core, the film is about Dave, a lonely, reclusive taxi driver who spends his nights driving around, picking up all sorts of people, but never actually making meaningful connections.

The gritty, neo-noir downtown is the perfect backdrop for the film's two central themes: reality vs. fantasy, and human agency - can we outrun the past to become better, or are we bound by destiny? As the story unfolds and we venture further into the night, Dave - and by extension the audience - is faced with strange experiences and images that challenge what is real and what is illusion. Things become less clear, and the visuals become more vibrant and dream-like. I wanted to develop a complex, layered narrative that became increasingly more dream-like and surreal as the story developed. My intent is to take the audience down the rabbit hole on a trip through wonderland and have them emerge the other side both baffled and entertained.

Carina Garcia - Hair and Make Up 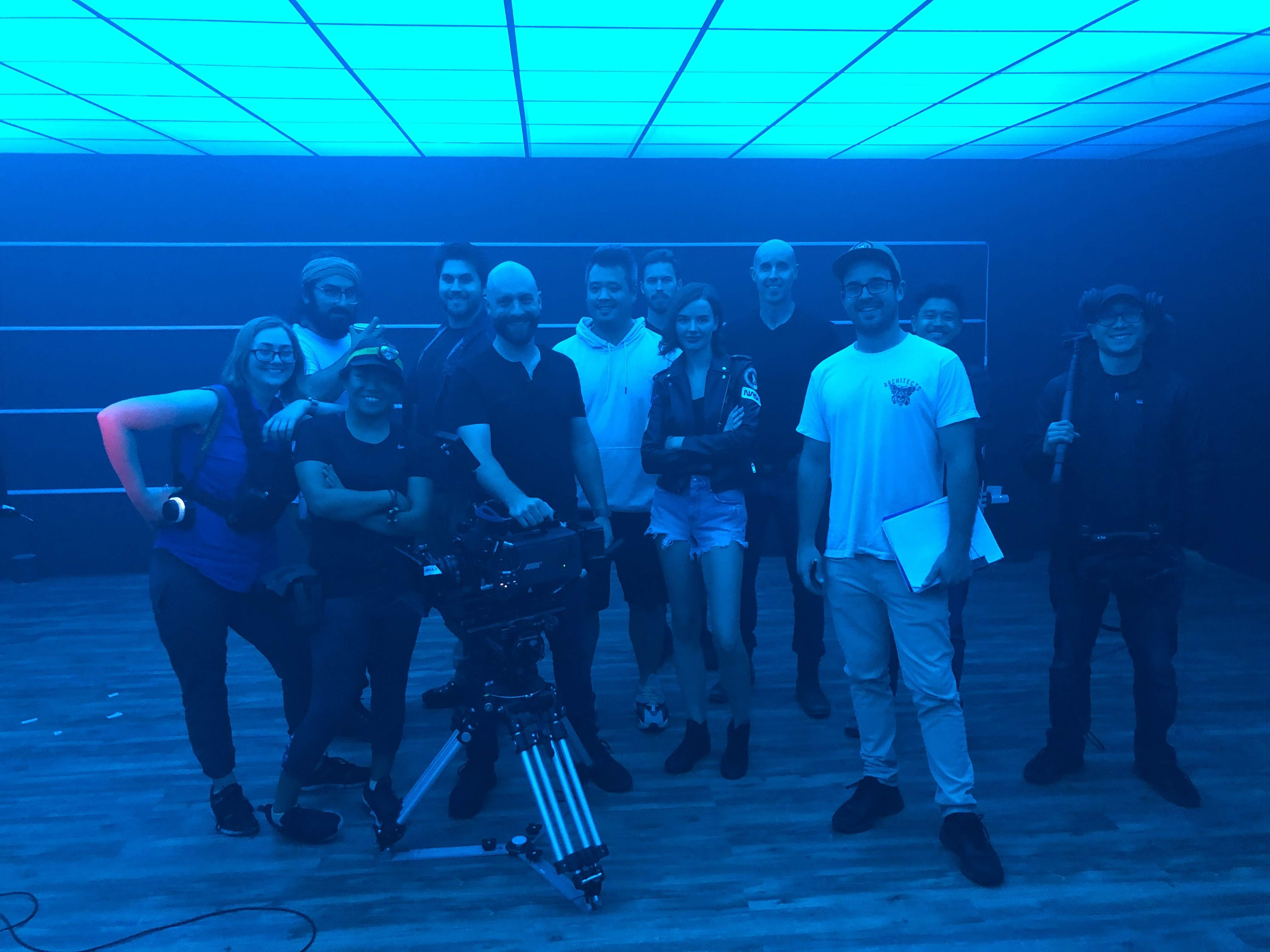 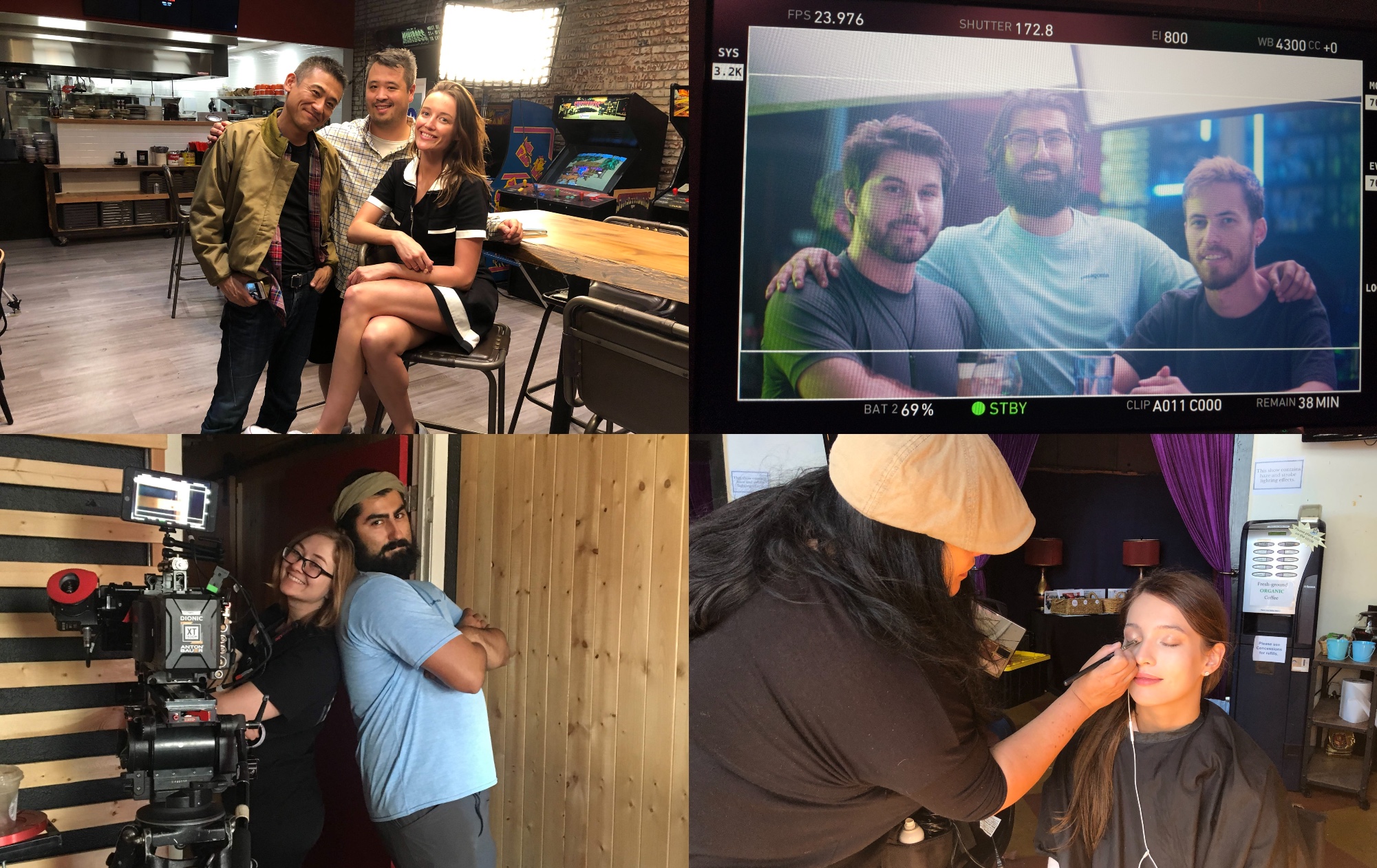 "The cinematography is gorgeous and I loved the stylistic approach. You will leave it feeling like you watched some crossover of Twin Peaks and Mandy."

"Takeuchi is endlessly likable, sweet and amicable. Hammonds is also a perfect driving force: aloof, cocky, and mysterious, but also flirtatious and bullheaded."

Cinequest Cinejoy Reviews: Drive All Night - When It was Cool

Enjoy Your Ride Through the Sleek, Stylized World of Drive All Night - Rue Morgue

Drive All Night to Screen at Cinequest - Heavy Cinema

Drive All Night (2021) Preview of Surreal Trailer - Movies and Mania 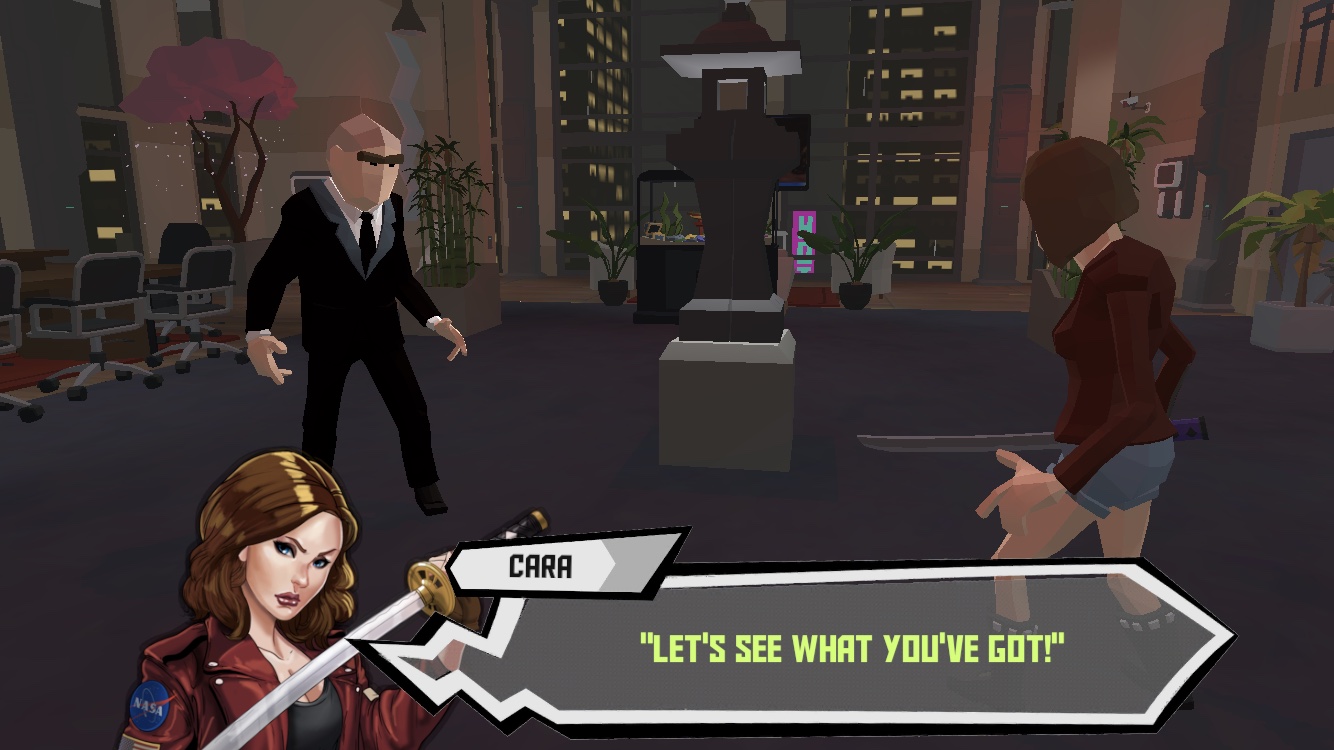 Can't wait to see the film? Watched it and want more?

Explore new parts of the world and alternate realities not included in the film. Play as Cara and fight your way through multiple levels of enemies and mini-boss before facing off with the big boss himself. Unlock a secret zen garden level where you can truly test your skills!

Available as a free download on iOS and Android! 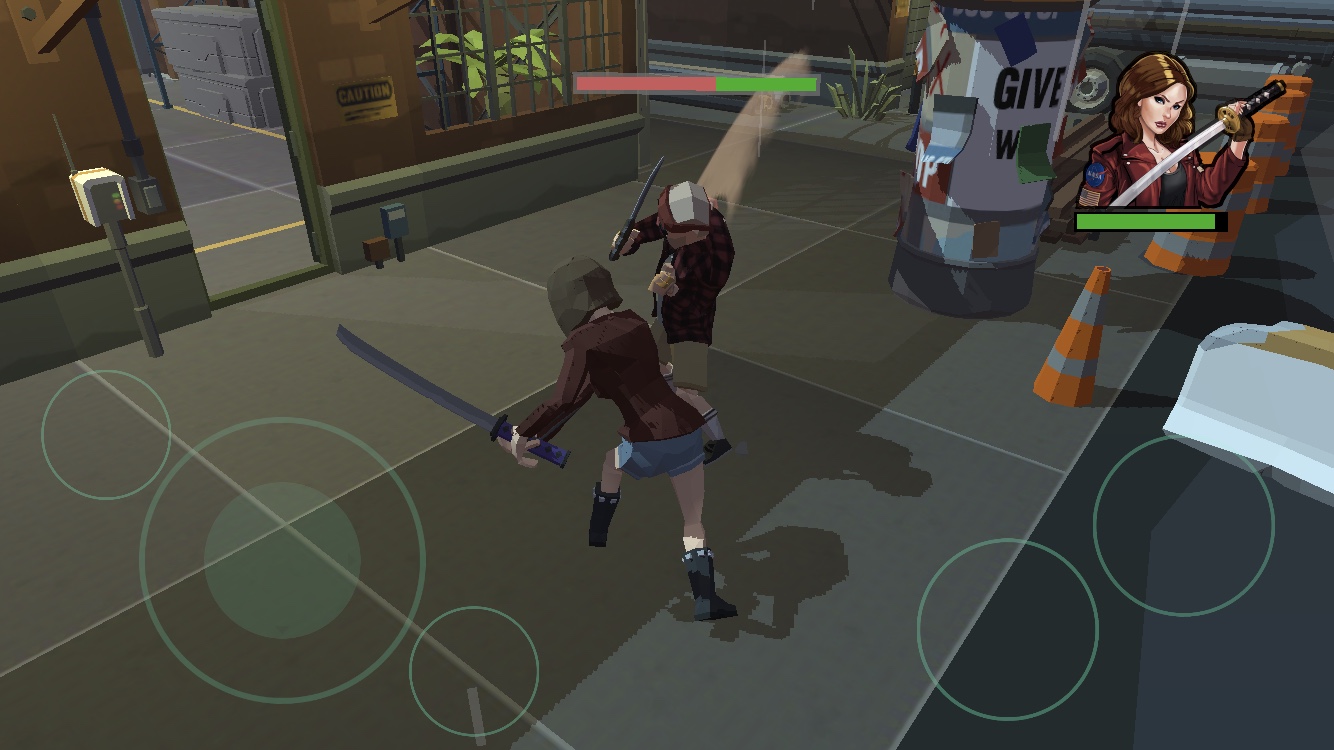 Filmmaking is a collaborative process. What you see sitting in a theater or at home is a culmination of hard work, talent, and generosity from many different people. We want to sincerely thank and recognize everyone who helped make this film possible, whether it was an indiegogo donation, renting out your space, or volunteering your time and resources. We couldn't have done it without you. Thank you from The Drive All Night Team!